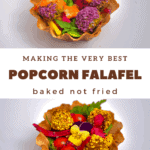 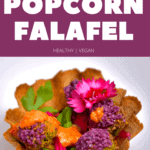 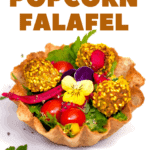 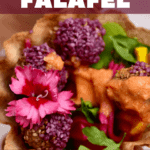 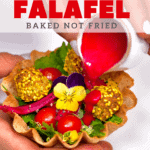 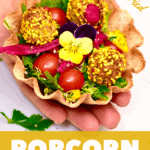 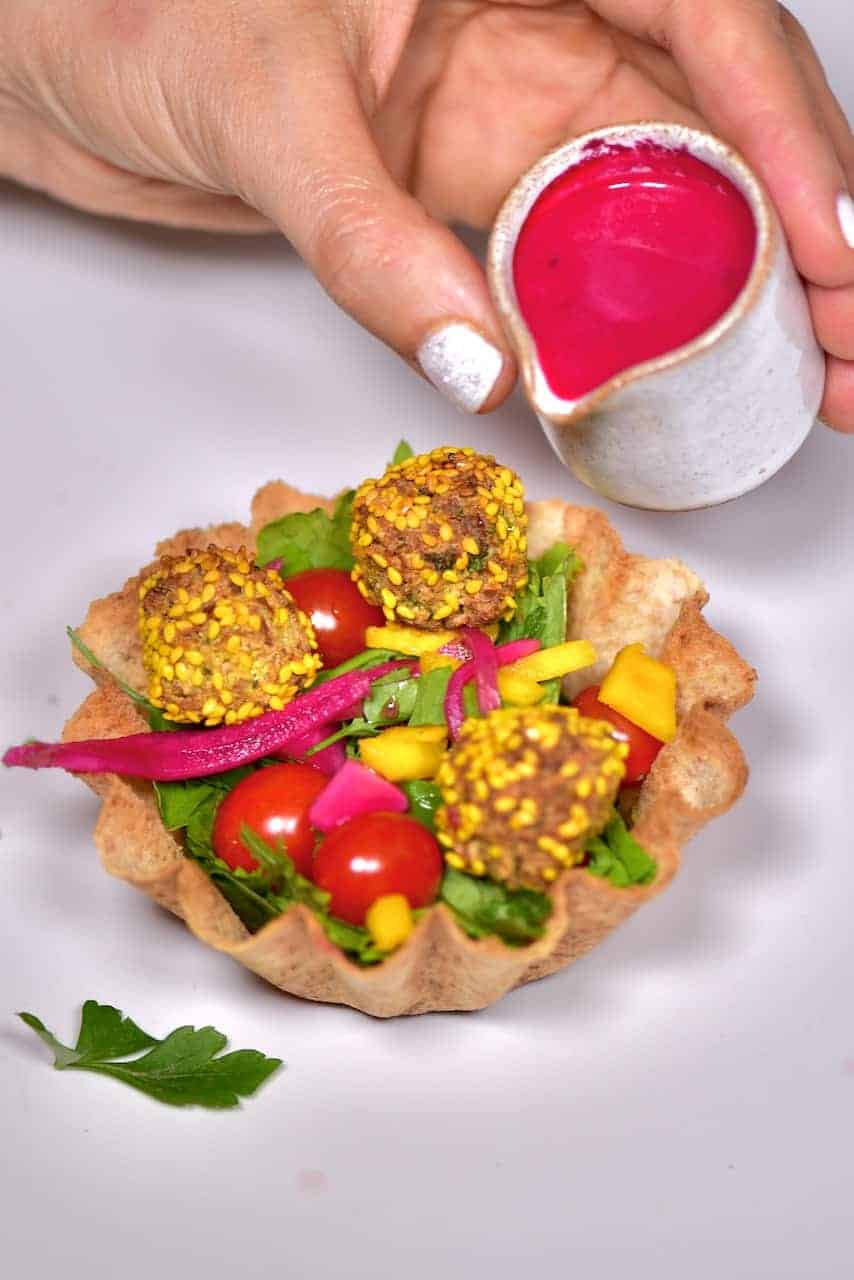 These delicious Healthy Vegan popcorn Falafel Cups make for a wonderful, healthy vegan party food option or hand-held vegan appetizer. The popcorn falafel is made using a traditional falafel recipe and then served within a pitta ‘cup ( or tortilla), salad and drizzle.

I love falafel – an authentic middle eastern classic! In fact, I have a recipe for Rainbow Vegan falafel recipe here made 100% traditionally and fried. However, for these healthy falafel cups, I decided to make baked falafel instead for an even healthier option.

These make for a great vegan party food option as they are relatively budget-friendly and you can even create a DIY falafel cup station so guests can pick and choose their salad and dressing option. I’ve made these even more of a great party option with all-natural rainbow toppings. 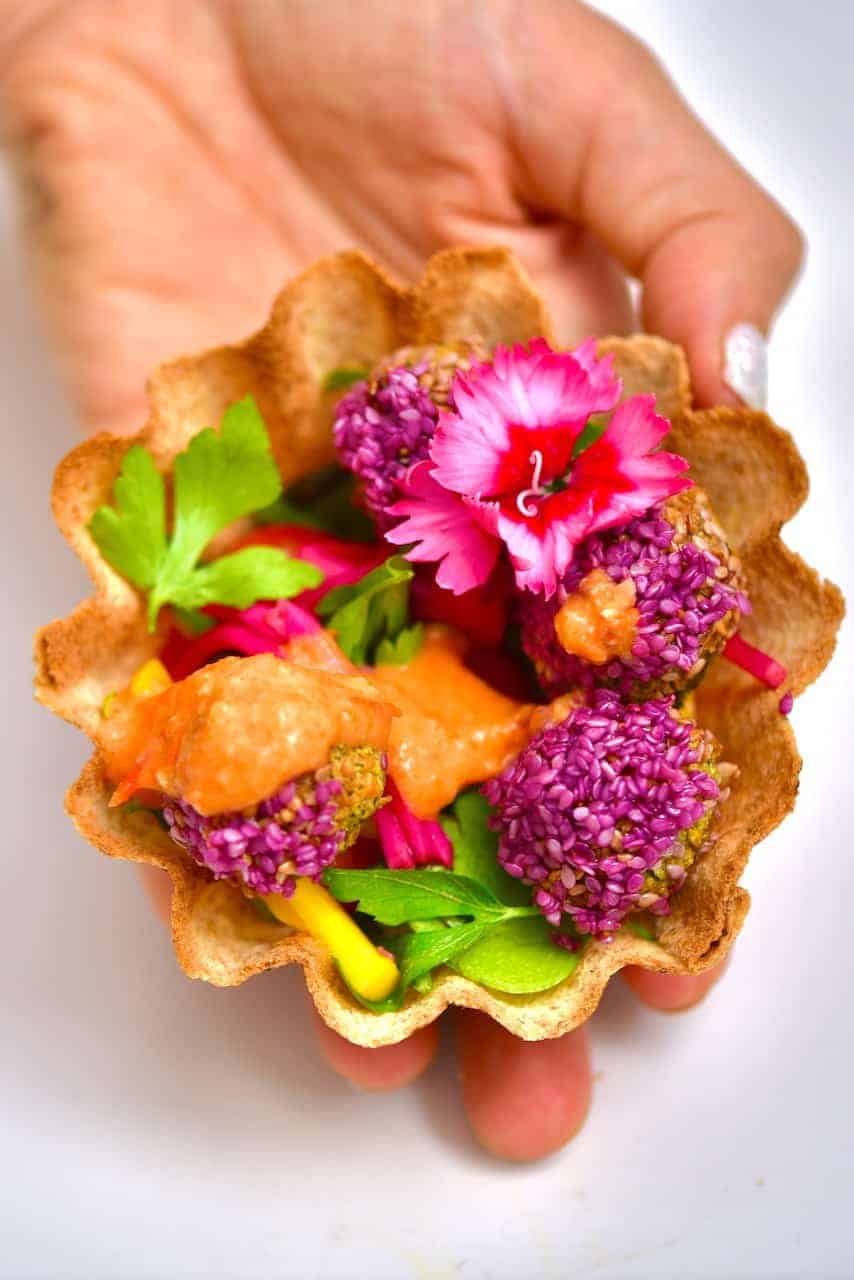 Even if you’re not vegan, it’s always good to have a selection of Vegan recipes in your arsenal and this one is particularly delicious for meat-eaters and non-meat-eaters alike!

Using superfood powders and dried flowers, you’re able to make some beautiful natural dyes for the sesame seeds. Now obviously this isn’t necessary – but it’s a beautiful touch if you’re creating these as a Vegan party food option or easy vegan appetizer at an event or special occasion.

It’s important to know that when making traditional falafel it’s best to use raw chickpeas and fava beans that have been soaked for 12 hours, rather than canned as this is integral to getting the best possible texture. Also, I do sometimes skip the fava beans, and the recipe still tastes great!

How to make the Healthy Vegan popcorn Falafel Cups:

To begin making the popcorn falafel, you need to soak the dried chickpeas and fava beans in large bowls of water overnight ( or for around 12 hours). Once soaked, drain and rinse them thoroughly. 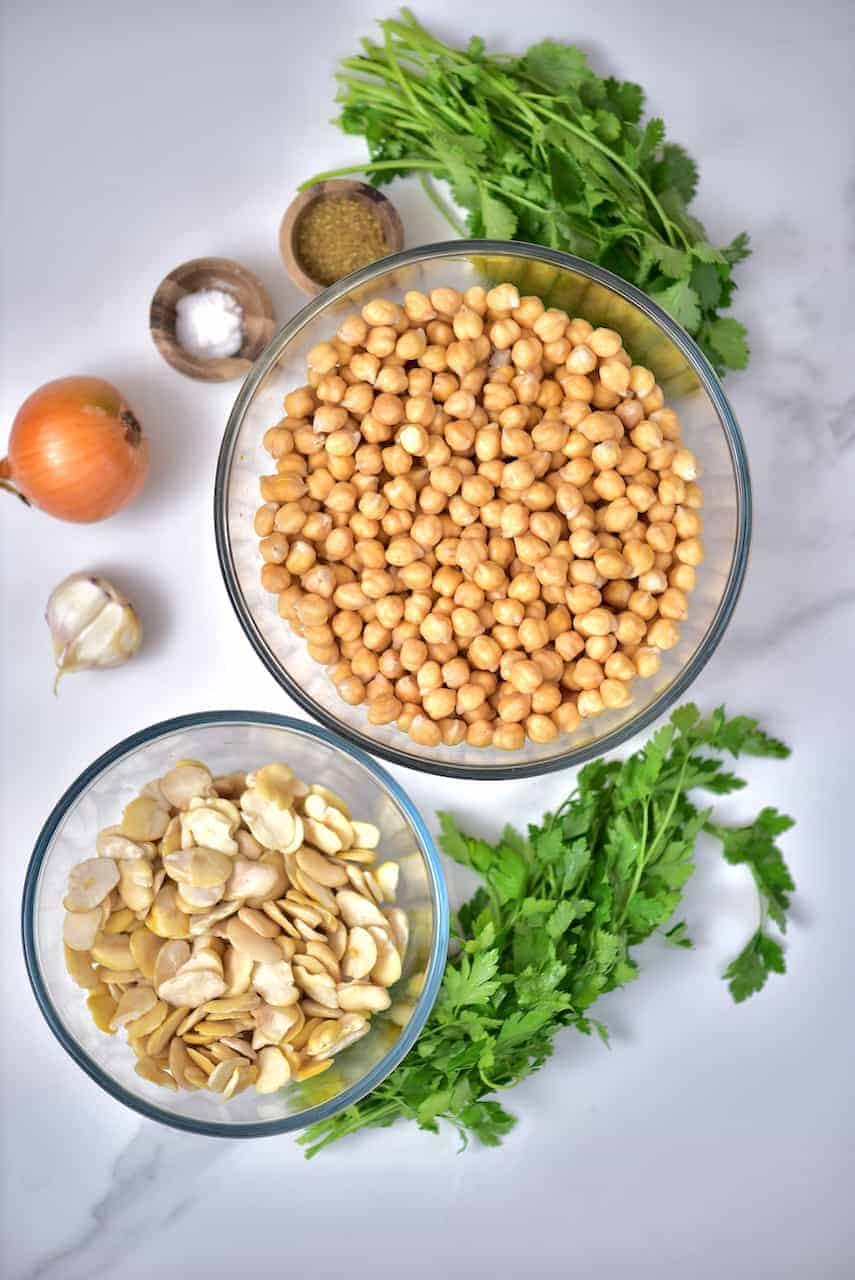 All the soaked chickpeas and fava beans to your blender/ food processor along with the rest of the falafel ingredients and blitz until you get a thick paste (not too smooth). If deep frying the falafel, this is crucial to stop the falafel from falling apart. That isn’t 100% necessary for this recipe as they are oven-baked. However, they do still need to stick together and be easily formed into balls. 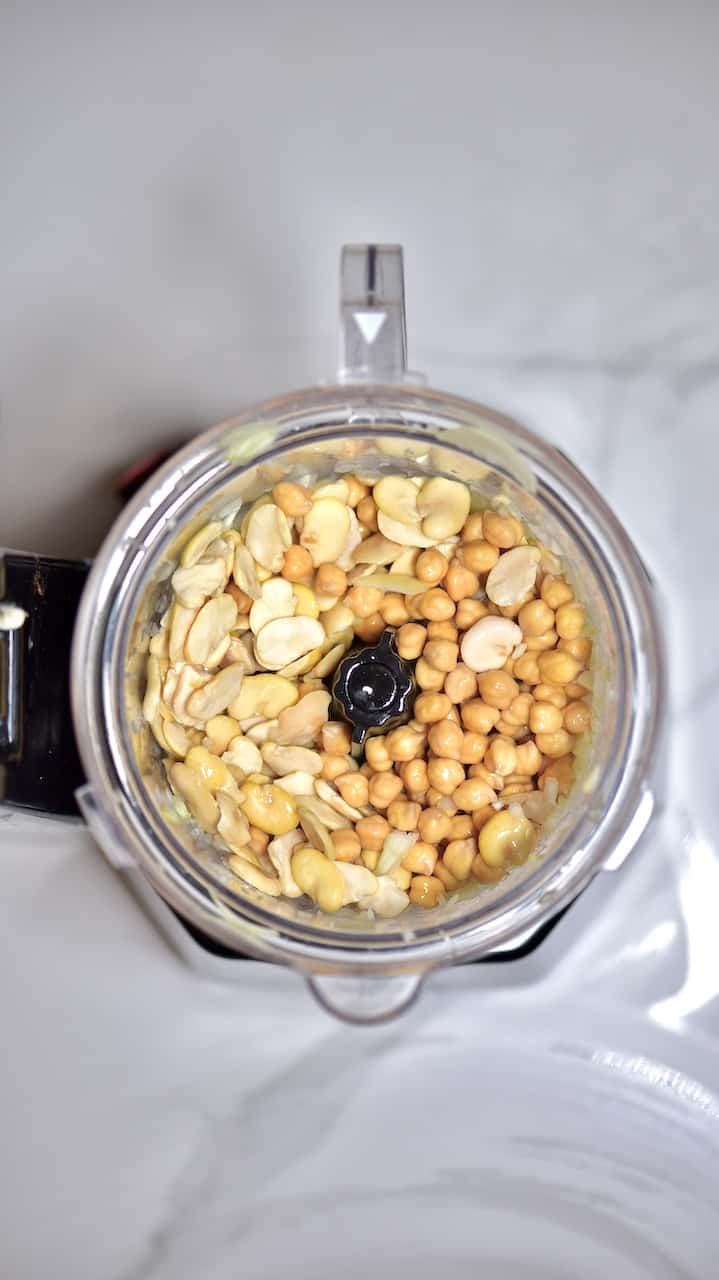 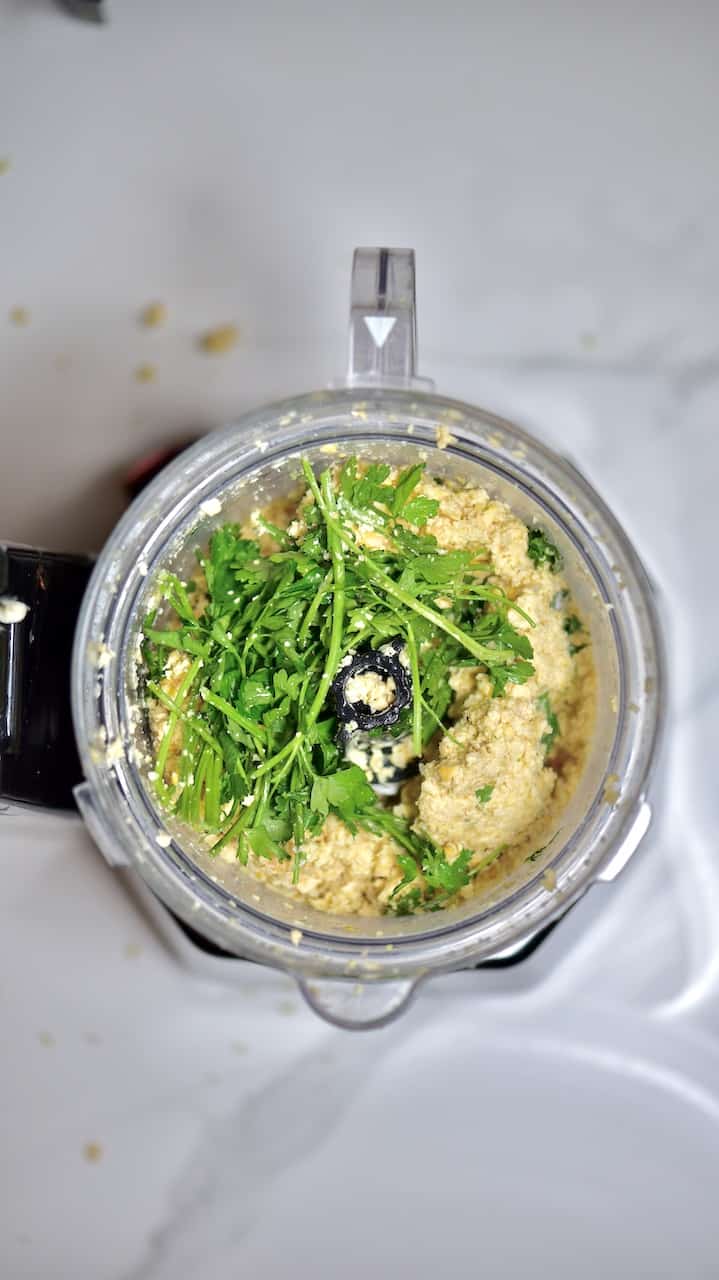 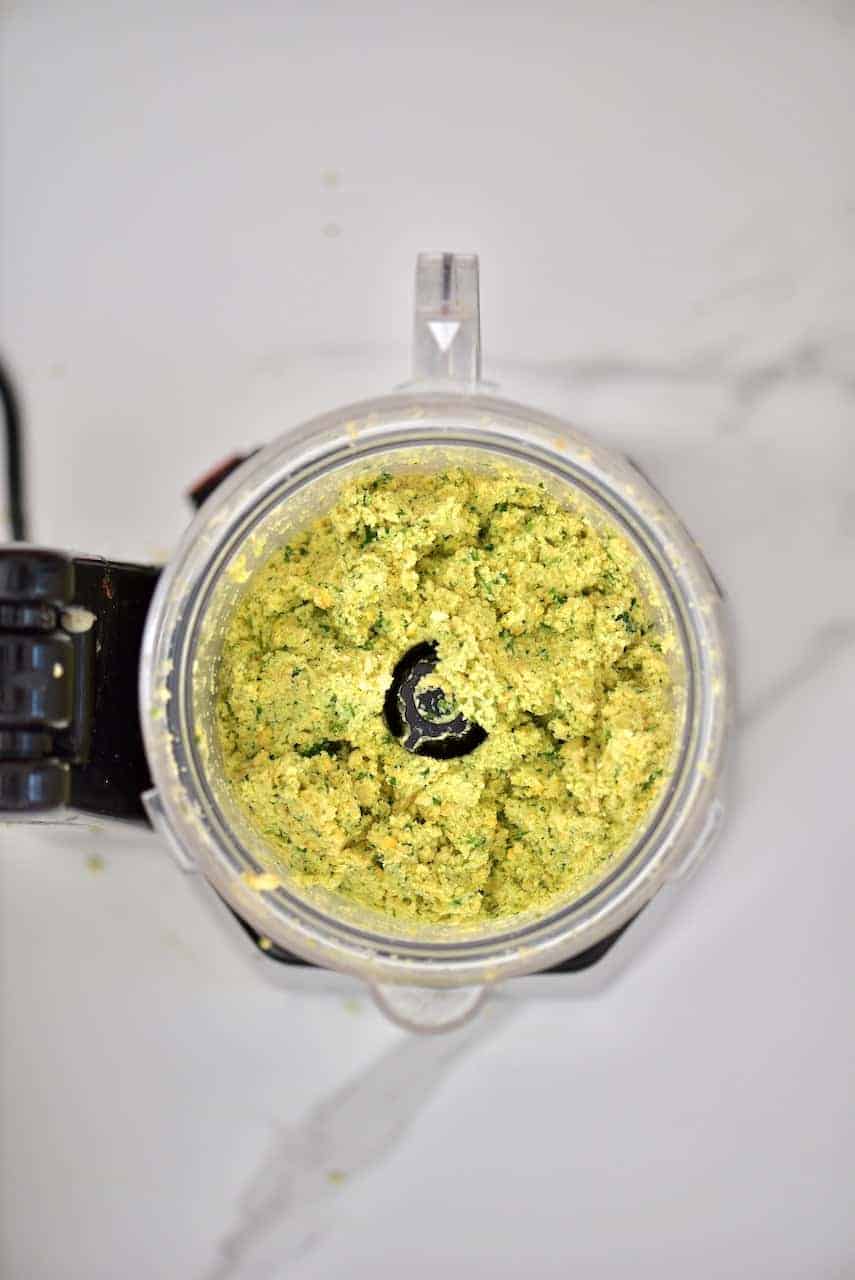 This falafel mixture is then ready to roll into balls. If you want to make traditional large falafel, you can do so now. However, I wanted to make popcorn falafel, so I rolled them into small falafel balls.

I didn’t measure my mix or anything and rolled my falafel in a fairly rustic way. However, if you want to be a bit more methodical about it, then I suggest using around one tablespoon of falafel mix per falafel. 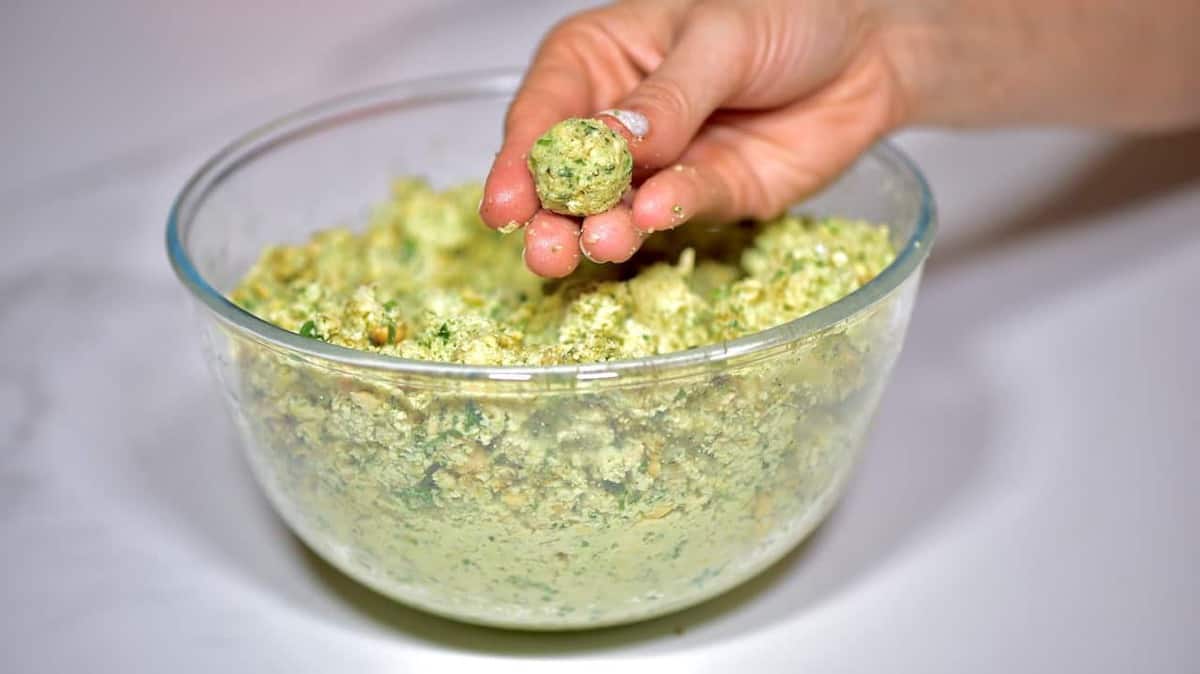 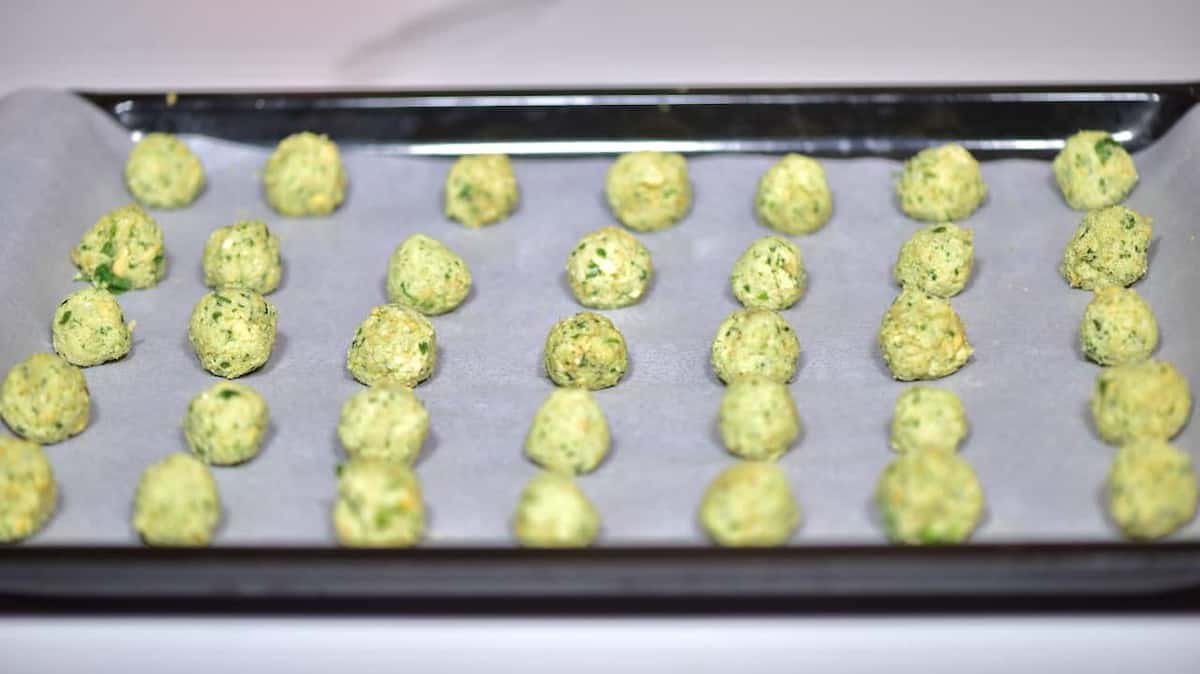 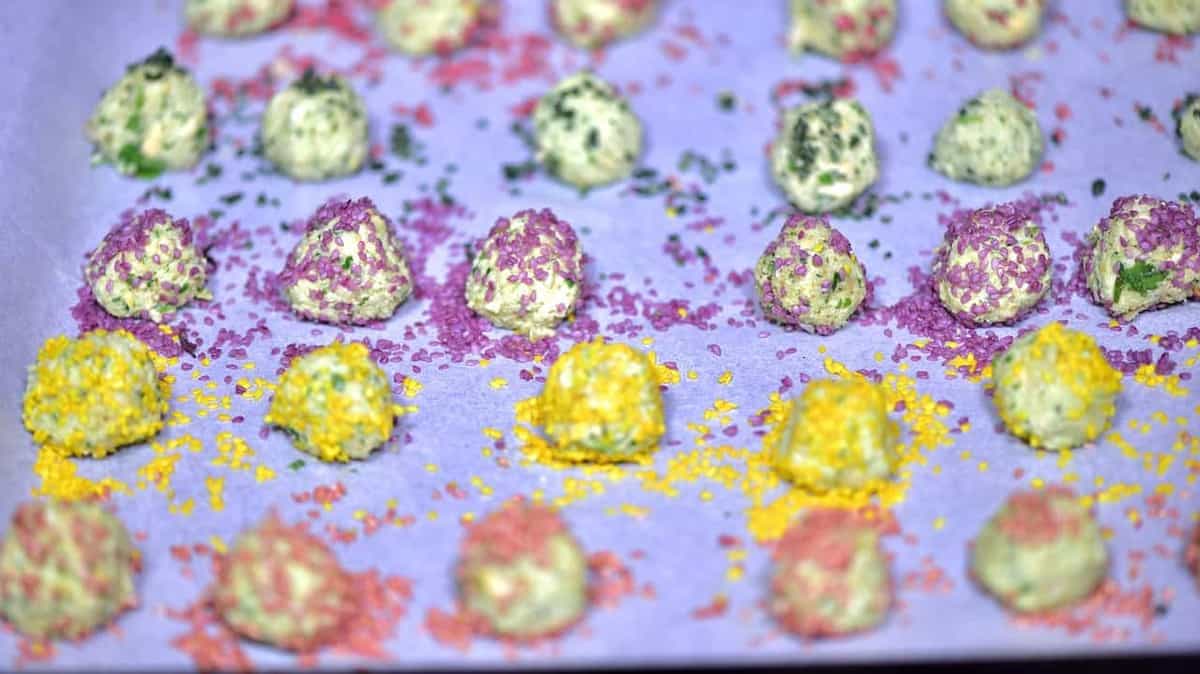 You can then sprinkle these with sesame seeds. I used homemade, naturally coloured sesame seeds. However, you can stick to plain white ones if you’d prefer.

These can then be baked on a lined baking sheet /tray in the oven till golden brown and thoroughly cooked. ( exact times and temperatures in the recipe below).

Using homemade natural colourings is a great way to be mindful about what you’re eating while still adding some bright fun to your meals.

To ‘dye’ these sesame seeds a variety of colours I used a mixture of superfood powders an edible dry flowers. These include; green spirulina, turmeric powder ad Matcha ( for a lighter shade of green). I also used safflower and hibiscus as the flowers.

To make the ‘dye’, pour in warm water until the seeds are completely submerged and mix them till the colour is thoroughly distributed. Leave the seeds to soak for around five minutes. 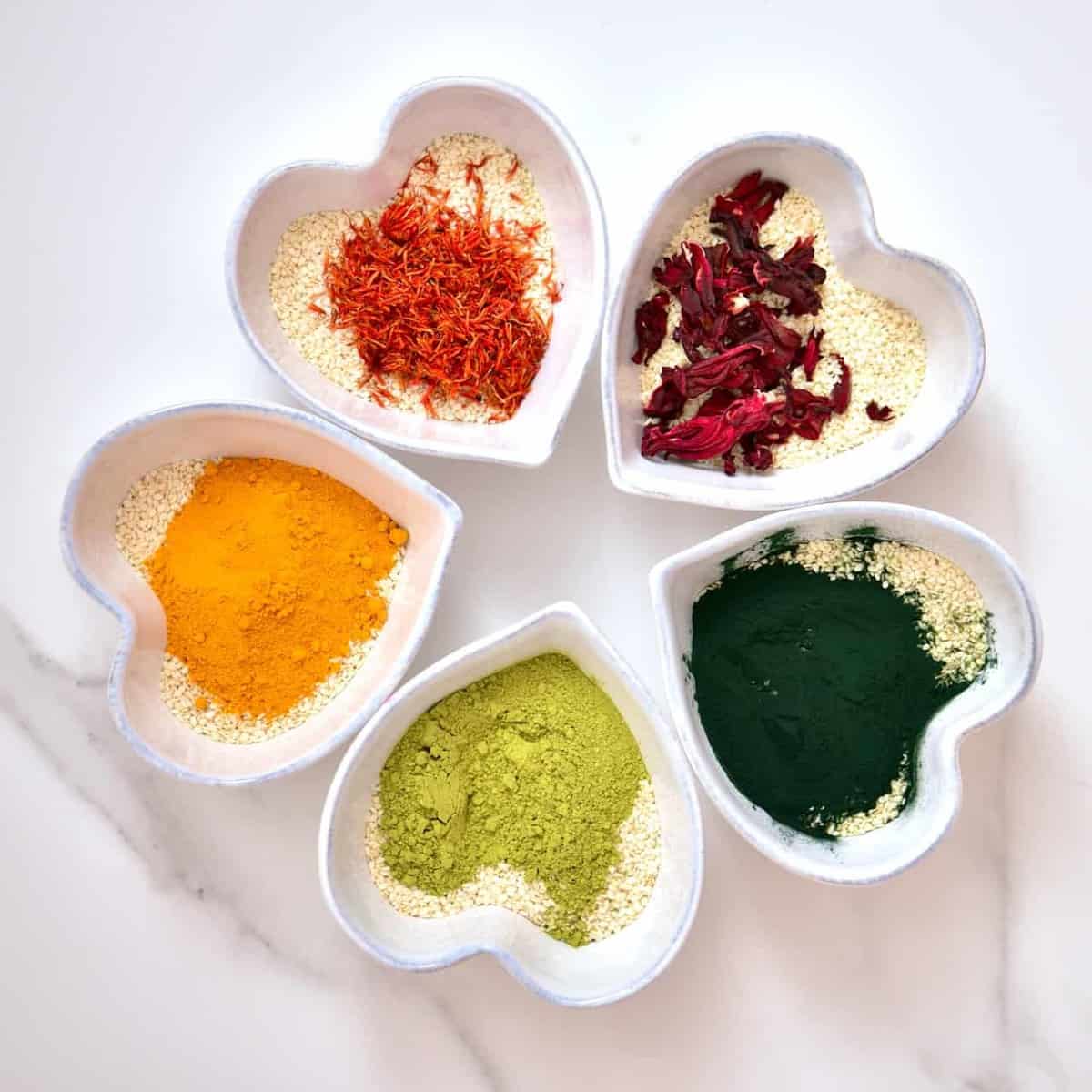 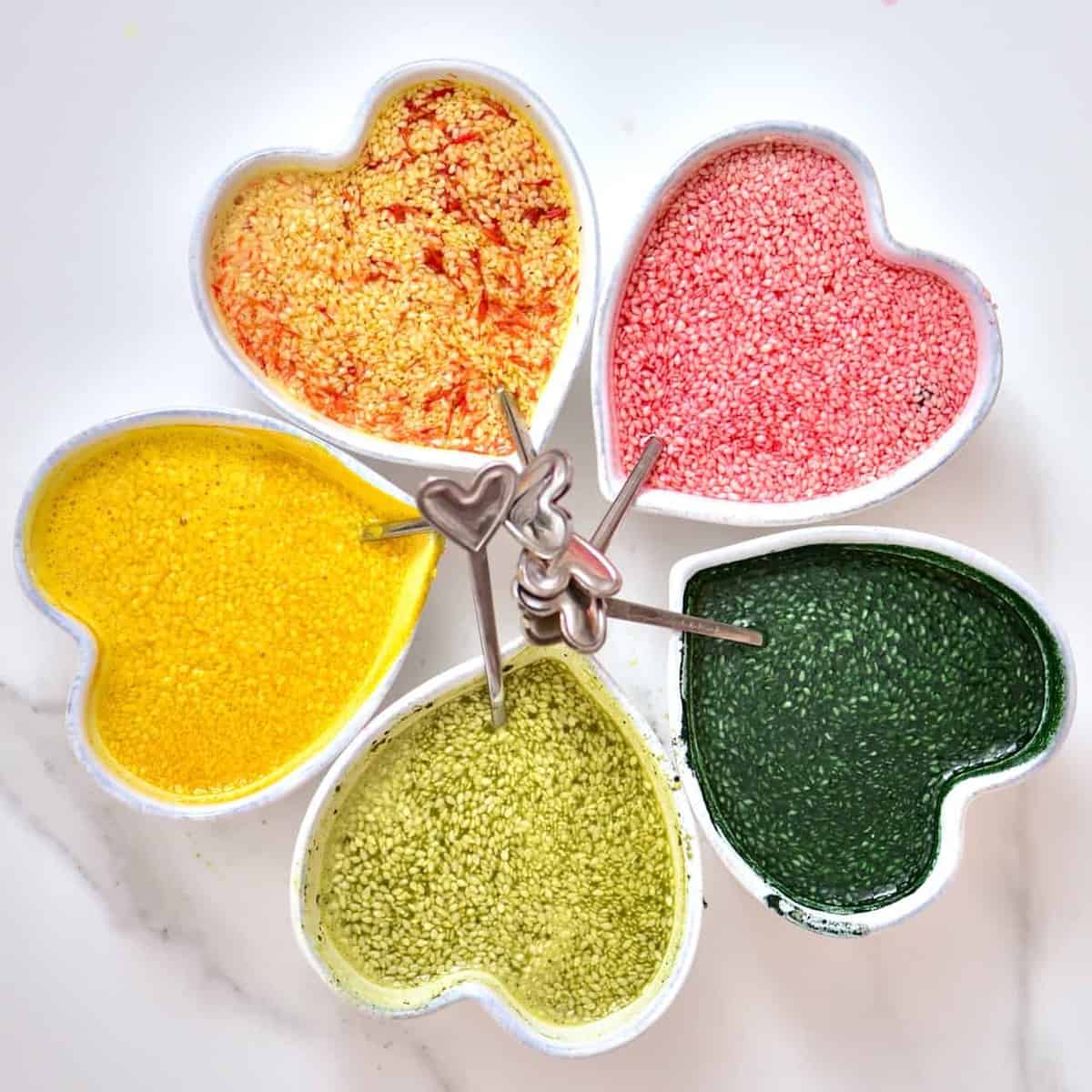 Once they’re thoroughly soaked, drain the excess liquid, and It’s then time to dry them.

There are two methods to drying out the seeds. The first is to spread them in a single layer on an oven tray and dry them out as a very low temperature, in the oven. Alternatively, if you live in a warmer climate, then you can leave them to dry out in the sun. 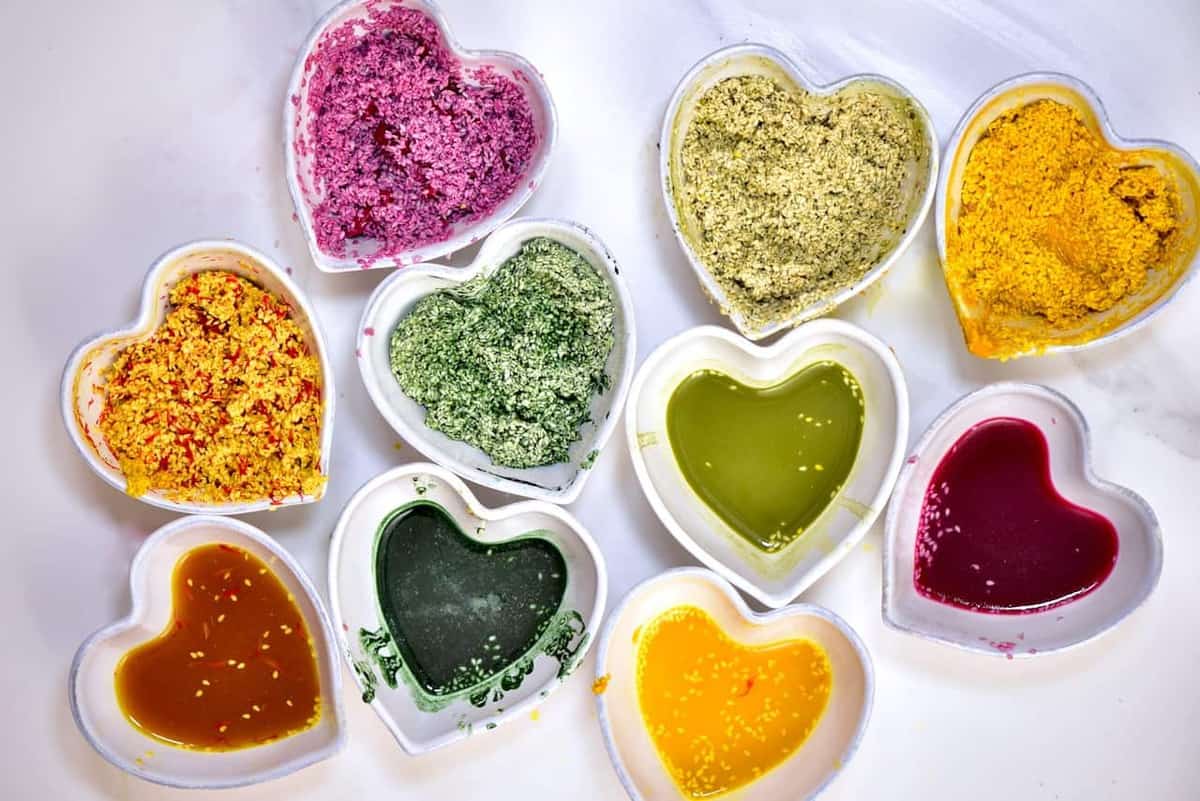 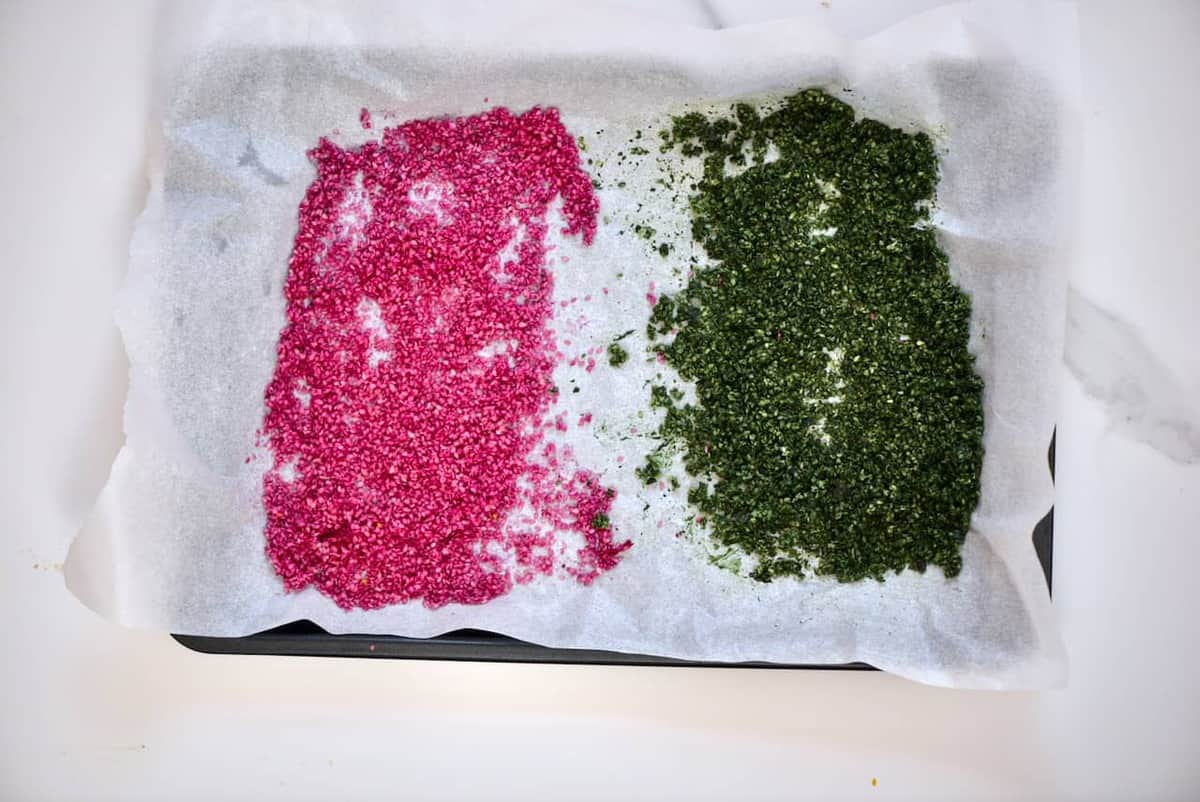 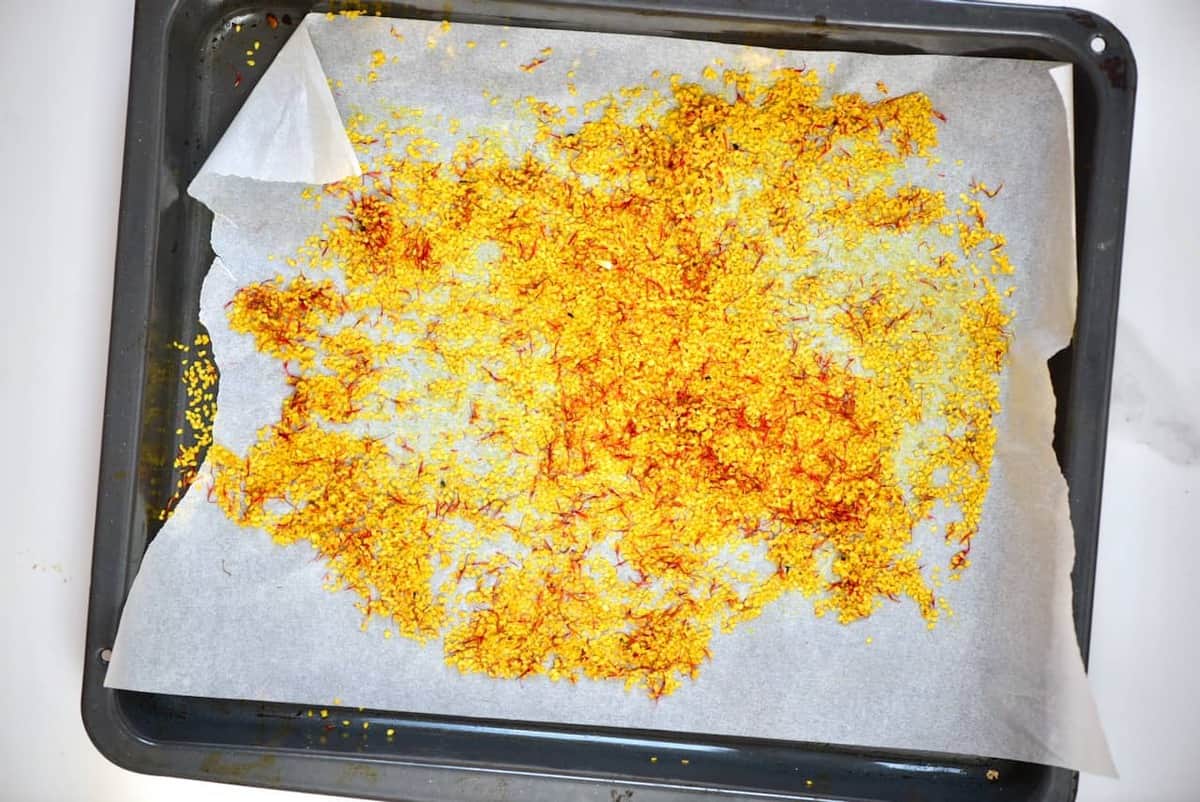 How to make the pitta cups:

To make the pitta cups, I used middle eastern wholewheat flatbread. You can buy this from any middle-eastern store. Alternatively, you can use your favourite tortilla of choice.

To press them into shape, I chose a mould I’d like to use and pressed it into the mould, placing a second mould on top of it to really push it into shape. You can then use a knife or pair of kitchen scissors to cut around the shape of the mould.

Finally, I sprayed the bread with a little bit of oil and then left to bake in the oven for a few minutes until lightly golden brown and crispy. 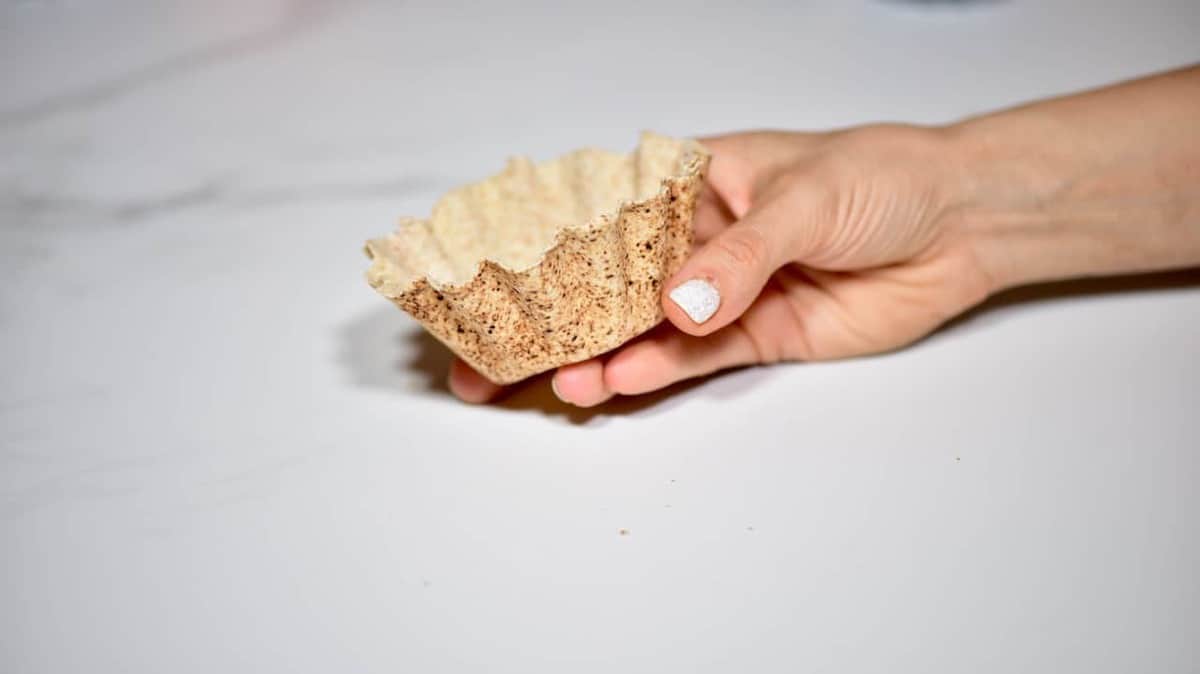 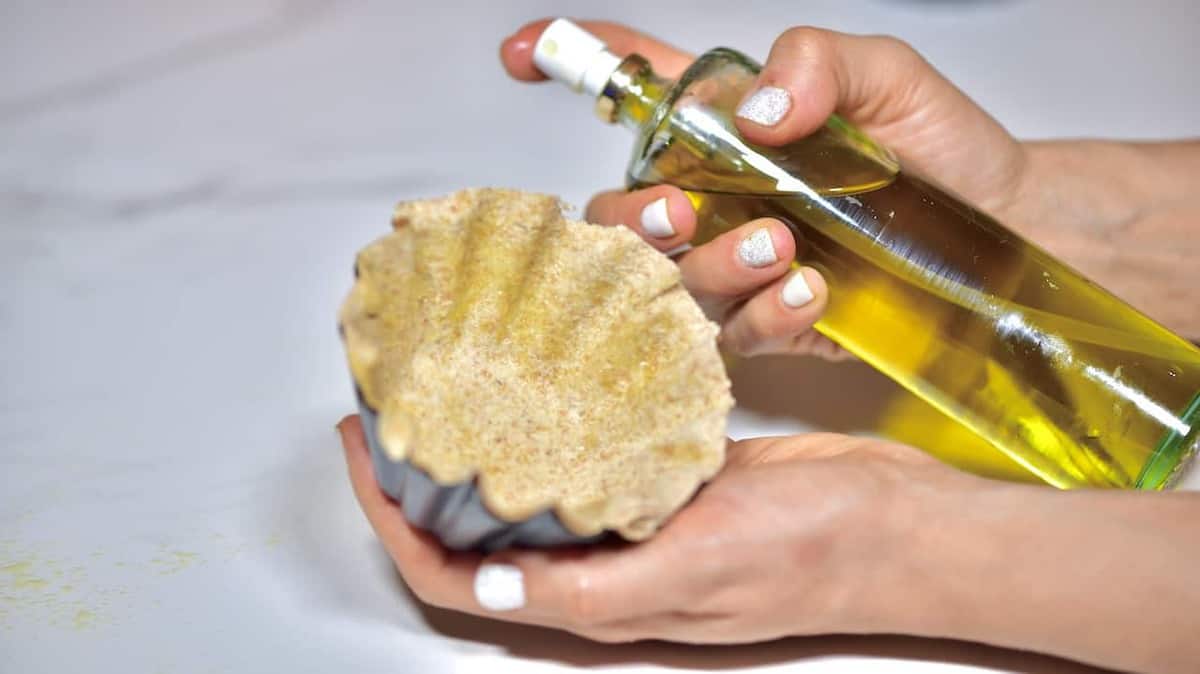 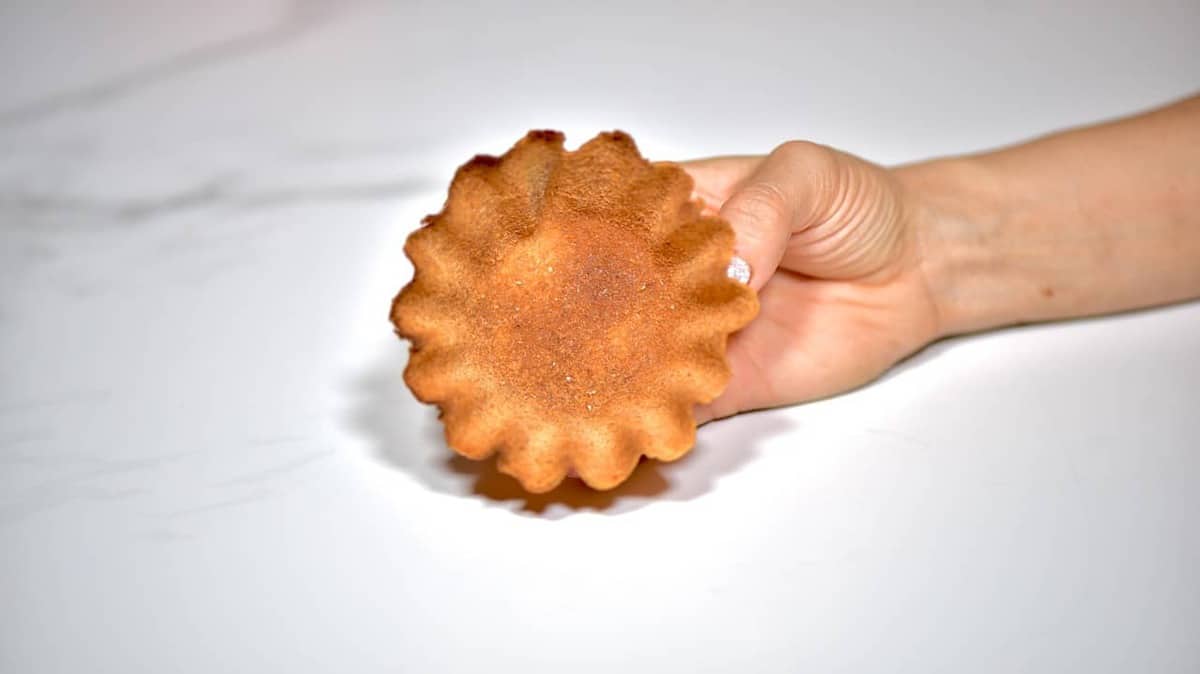 Once the cups and falafel are baked, you can assemble the falafel cups. To do this, begin by adding a salad selection of your choice to the cups. Place a few of the popcorn falafel on top and then drizzle with your choice of sauce.

Some of my favourite salad choices include a mixture of salad leaves, cherry tomatoes and the pickled vegetables. However, you could also add cucumber, finely sliced raw onion etc.

For the sauces, I used a simple homemade tahini sauce using some beetroot juice, roasted peppers, and purple cabbage to colour it various ways. 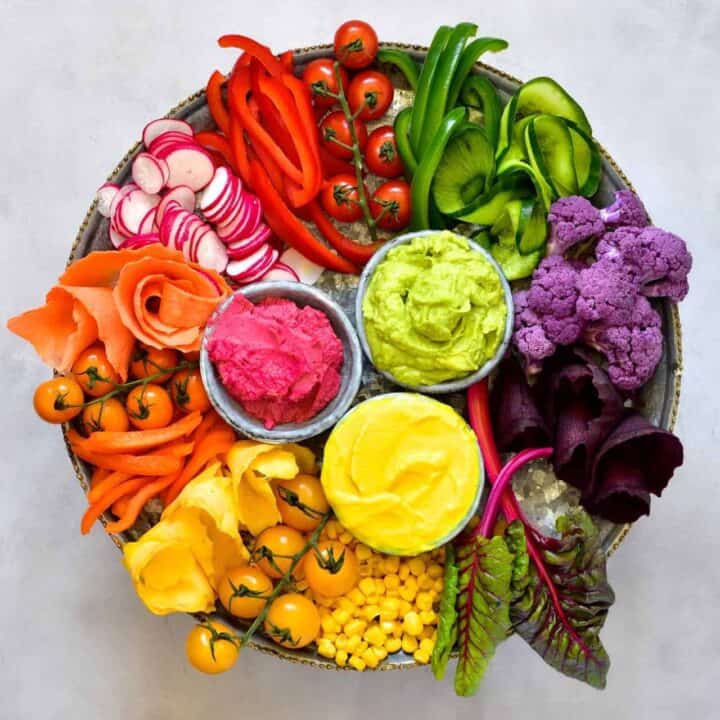 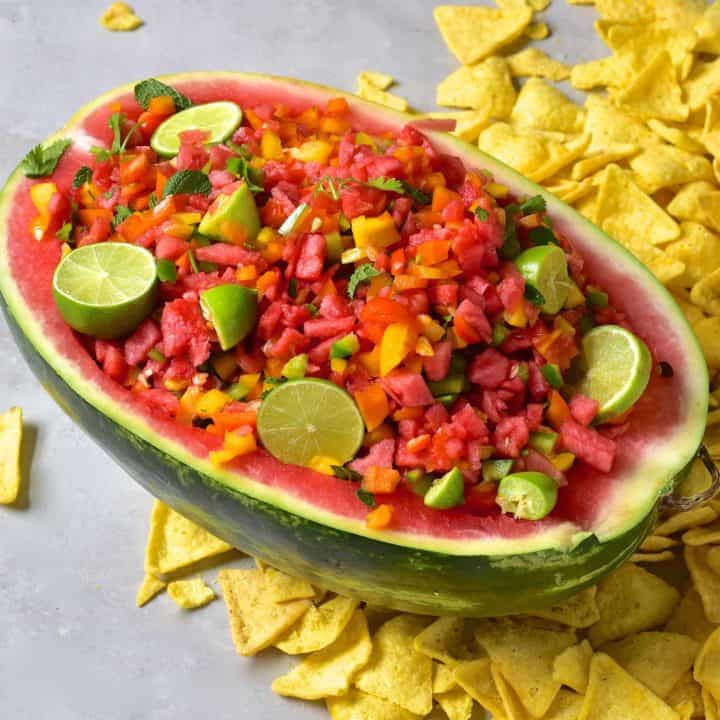 If you’re already in the Vegan party mood and wanting some inspiration for other simple, delicious Vegan party food options then you may like some of these Recipes. If you’re wanting to create a wonderful party platter/spread then you might like this rainbow hummus platter ( 6 ways!). For anyone wanting to include a vegan cheese /cheeseboard then you may like this vegan Cashew cheese and for something fresh and fruity, how about a party-sized serving of fresh watermelon salsa.

Alternatively, for other fun, rainbow finger food, you could serve up wonderful rainbow pizza slices or these funky mixed rainbow vegetable cupcakes. Last but not least – if you want a drink to impress, then you might like this magical colour-changing lemonade. 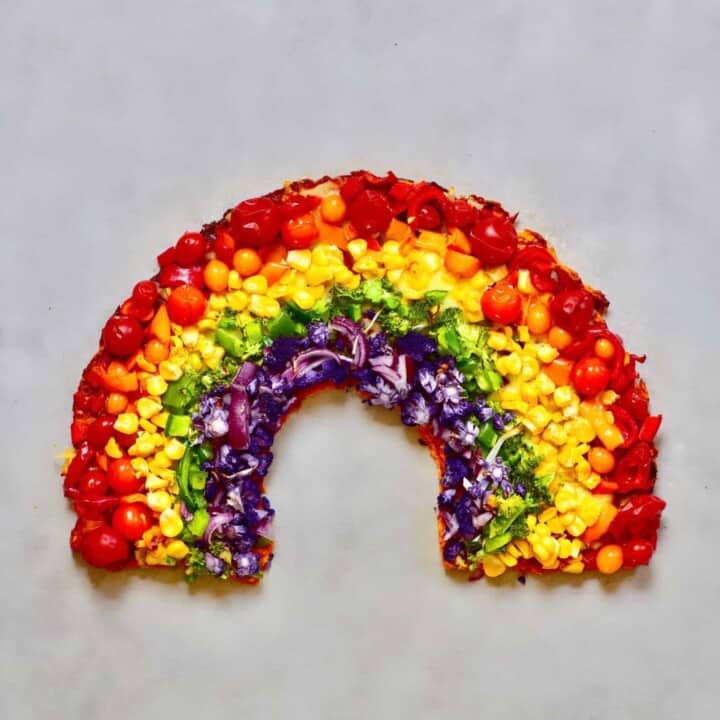 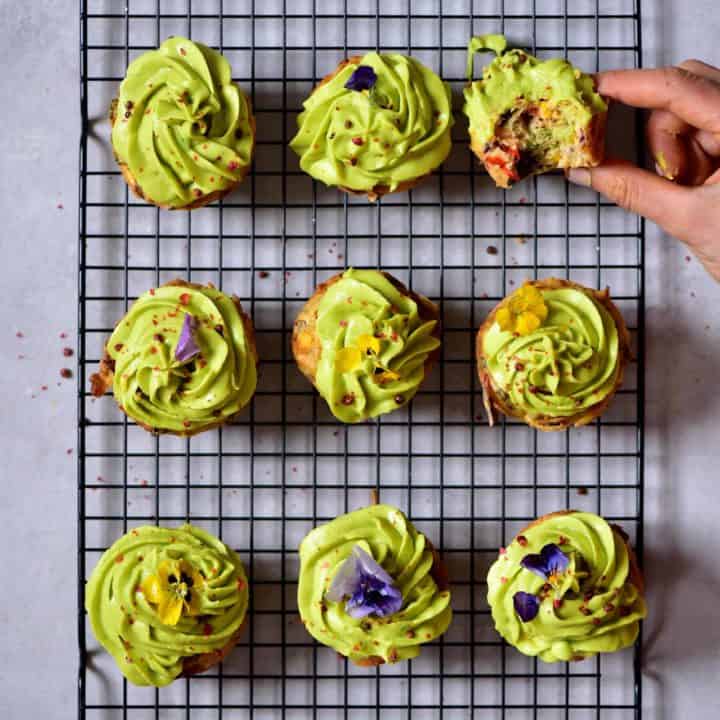 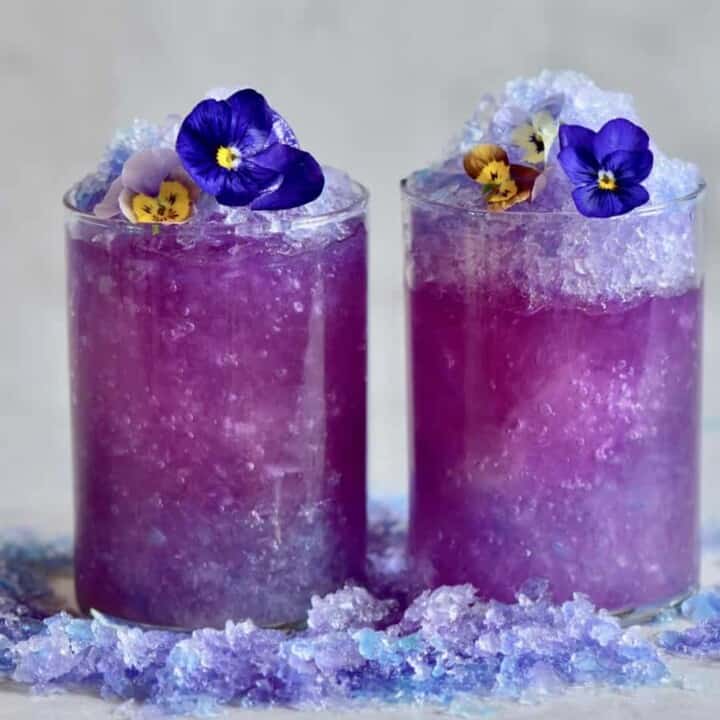 If you give this recipe a go, let me know your thoughts in the comments below. Also, feel free to tag me in your recreations @AlphaFoodie.

This site uses Akismet to reduce spam. Learn how your comment data is processed.